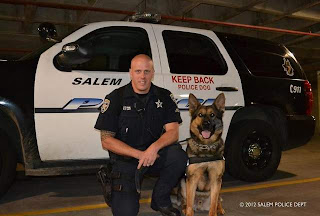 Readers of the Statesman Journal woke up this morning to meet Salem Police Officer Sean Cooper and his canine partner, Cito.

The team patrols parts of North Salem and comes to the aid of other officers searching for hiding suspects throughout the city. They also were on hand to meet the public when the Salem Police Foundation featured the department’s K-9 unit Feb. 29 at Breakfast with the Chief.

Cooper is an 18-year law-enforcement veteran who grew up in Salem-Keizer and graduated from McNary High School and Western Oregon University. Cito is a three-year-old German shepherd from the Czech Republic. When he’s not on the prowl for bad guys, Cito “acts like a gentle puppy,” Cooper said.